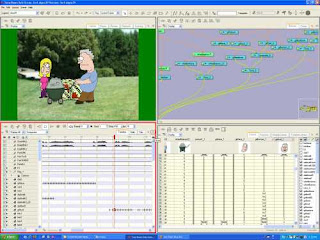 You’ve finished the animation. Proudly, you show it for final approval. You’re confident it’s great. Then it comes back: “Uh, we just need a few changes.”

In the world of filmed animation, those words would likely have provoked violence.

Fortunately, those days are behind us. Now, you can be much more flexible.

The process of tweaking an animation with a rigid thirty second limit usually involves tweaking the entire sequence. Sound tracks must be either redone or modified to make longer or shorter… usually shorter. You clip out small silent spots. You electronically speed up the sound without changing the pitch, being careful not to destroy its natural quality. Finally, you have a soundtrack that meets the necessary demands.

Now, you have to fix the pictures. The sound sync is now totally wrong. The camera moves to the wrong spots. ..And, you have some more drawing to do.

I’m learning all sorts of tricks in Toon Boom’s Solo animation software to carefully modify the animation without totally redoing it all. It’s easier than you think, though not without careful effort and thought.
Solo has an ability to duplicate character drawings, change the sequences before eliminating the original sequence, and then automatically synching the words to the mouth positions (which is only a rough guide, but incredibly helpful).

Certainly, the process is very different than film!