November 20, 2008
I frequently get this question: “How did you create those animations and how can I make them, too?”

In the old days of animated movies, drawings were transferred to clear sheets of acetate and each individual picture was painted. It was tedious and labor intensive. Movie film can be very unforgiving. Once you start clicking the movie camera, there is little room for error. When I first became serious about making animated movies in the 1970s and 1980s, this was the only option.

Now, thanks to the miracle of digital motion pictures, anyone on a budget can create big screen quality 2D animation movies. 2D animation refers to the type seen in such movies as “Snow White” or “The Simpsons,” rather than the 3D style of “Toy Story.”
Many companies have software for creating 2D animation and the price varies considerably. After trying many packages, I came to love the Toon Boom product line of animation software (http://www.toonboom.com/) for both the Mac and PC. They have a variety of animation software to fit all levels of animation expertise.

For those easily intimidated and new to the craft, “Flip Boom” is very affordable and enjoyable for both children and adults. Even a five year old can master the “Flip Boom” interface. Yet, its kid-friendly interface disguises a program of remarkable power. The program costs about $40 and can be a Holiday gift for the aspiring artist in the family. You may find the program to be more addictive than any video game. 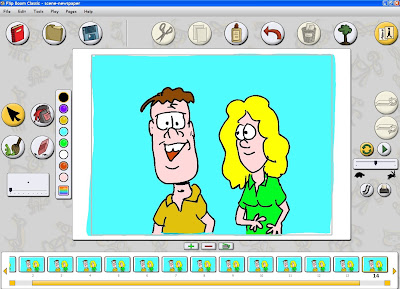 For teens and above who decide to get more serious, the sophisticated program: “Toon Boom Studio” is the software I recommend. A very capable entry level version is available for about $100. If you want to press further, you can upgrade to the full version, allowing more features and complexity, for another $250. Both versions are remarkably full featured and are literally the only software you need to create a complete animated cartoon with sound. 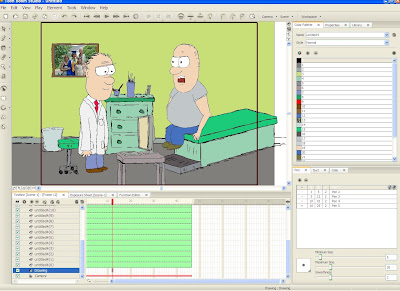 “Toon Boom Studio” is the product I used for the majority of my animated 30-second safe driving spots. All components of the creation, including sound and lip-synch, are covered. For serious animators, “Studio” is the product of choice. Almost all of the original programming on television’s Cartoon stations could be easily created in “Studio.”
Toon Boom also makes a high level professional product at a much higher price tag called “Digital Pro.” “Digital Pro” allows those extra touches that tend to differentiate a big budget motion picture from a “made for television” animation. “Digital Pro” is designed for the serious animator who is already very comfortable with “Studio.” “Digital Pro” allows the creation of subtle character shading, shadowing, and blur effects as well as complex character design for use in big projects. Most of my current work is now done in “Digital Pro.”
There are many other companies selling animation software, but these are the programs which seem to be the most usable.
Don’t forget to get a drawing tablet. Wacom is the industry standard and the only one I recommend. The smaller versions can be found for less than $100.
Tablet PC's are also a wonderful option for drawing. HP now has an excellent model that can be found at most of the big chain electronic and office supply stores. Many colleges are now encouraging their students to get tablet PC’s for taking notes.
The gift of animation is a unique and relatively affordable holiday idea. When you have finished your creation, be sure to share it on You Tube. My own current animations can be freely viewed at http://www.drmussey.com/.

animation programs said…
Thanks Steven for your reviews on Animation Software. Your Post give me the basic idea about Animation software and features!!
February 12, 2010 at 3:44:00 AM EST

software testing consulting said…
I just love toonboom, it has such a nice and funny interface. the cartoons are so cool, especially the men without the hair, It's brilliant.
October 27, 2010 at 3:55:00 PM EDT