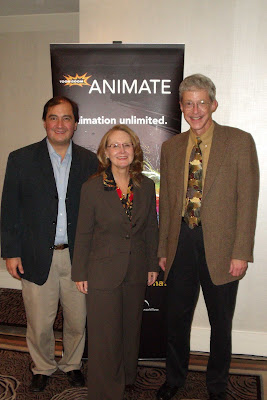 This week, I attended the "More for Less" event in Washington, D.C., sponsored by Toon Boom, the makers of animation software.

In the 1930's, Walt Disney was not content to only create an animation studio. He wanted to form an "animation community" to foster and enhance the art of animation. His efforts resulted in some of the finest animation of all time and, of course, ultimately led to the creation of the entertainment powerhouse we know so well today.

Joan Vogelesang, CEO of Toon Boom is attempting to create and foster a similar community, using the miracle of worldwide interactive communication. Animation is experiencing global growth. Skilled animators are now in short supply as studios across the world are created and expand. Yet, technology has changed the model. Animators no longer must congregate in a central Burbank, California headquarters as in Disney's day. Today, an animation studio can be virtual and literally span the globe.

The challenge is to change the thinking of traditional animators, particularly in this country. Though we must compete in this global economy, we can still be active participants. The message of the evening: We have the tools to do "more for less."

What is unique about Toon Boom compared to other companies has been its strong support of the animation community in all areas of the world.

Supporting the animation community was emphasized Wednesday evening and the excitement of the crowd at the D.C. event was obvious. The night started with a reception for a gathering of people from all areas of life, united by the common bond of animation. Most were total strangers before the event, yet the socializing was enthusiastic as everyone shared their thoughts, plans, and project hopes.

Joan Vogelesang's opening introduction was vigorous and inspiring. No sign of economic downturn here! Animation is growing even as the economy struggles (an observation, incidentally, also noted by Disney as he contemplated his studio in the midst of the Great Depression 75 years ago).

She then turned over the stage to company CTO Francisco Del Cueto who skillfully demonstrated the high points and capabilities of Toon Boom's various software products.

Cynically, we may remind ourselves that Toon Boom is in the business of selling software. Yet, this multiple city tour by the CEO and CTO is serving a purpose far beyond a simple sales pitch. This meeting inspired a sense of community among a scattered group of Washington, D.C. animators who were looking for motivation, ideas, and help. Contacts were made and concepts were discussed. Who knows what will emerge as a result of this meeting?

I have been using Toon Boom's animation products for the past six-plus years. I pay for their software and upgrades, so I have not been bribed to say nice things. The company's attention to detail is remarkable. This is also a studio in the big leagues. They make the animation software that runs Disney. Yet, they treated a group of rag-tag artists and animators like equals. Toon Boom is an involved, socially aware and active company.

All summer long, this tour has been in place, moving across the country. Frankly, I worried as I fought traffic Wednesday from Virginia to D.C. at the height of rush hour, that I was walking into a tedious sales event. I was pleasantly surprised. This tour is a wonderful idea.

No doubt, these presentations and gatherings are an expensive project for them. Hopefully, it will be repaid by many lifetimes of goodwill as the community continues to adopt their products.