December 19, 2009
Two months ago, October 2009, marks an interesting anniversary for animation: It’s been 20 years since animation software was available in any meaningful form for the PC platform.

Everybody hates it when old people start saying “I remember when,” but you cannot imagine the excitement I had when this software was first released. It literally made me buy my first computer: A Packard Bell 286 computer from a catalog-department store called Service Merchandise. The computer had a 40 megabyte hard-drive and 1 megabyte of RAM. 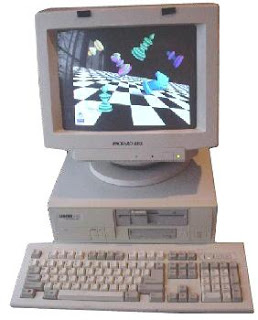 You young people need to pause for a moment and consider what I just said: My dream computer had less than 1/8000th the amount of RAM present in your pocket mp3 player. It did NOT come with a mouse, monitor, modem, network card, sound card (they actually barely existed then until SoundBlaster shook up the scene), CD-DVD-whatever drive…and so on. By the time I added the monitor and bought a mouse to install (yes, it was sold separately), the price was up to $4K in 1989 dollars.

Then I got a video card that was supposed to output to TV for another $900 (It barely worked).

Then I bought a drawing tablet from Summagraphics (later to be bought by Wacom) from a mail order company that later became CDW.

Then, I fired up my machine to make my first animation on the computer.

I don’t have the original files. This is from a videotape, made with that awful video card and recorded onto SVHS. It was actually played on the original 286 computer. See if you can guess when the computer was getting seriously strained…

It looked like crap! The sound had to be added afterwards by starting a reel-to-reel tape at the exact moment the animation started. The scene to scene transition was so horrible due to the slow graphics, you had to start and stop the VCR on each scene to primitively edit the movie. I am amazed it looked as good as it did!

Was this a step up from Super 8mm movies that I did in the pre-computer animation era? You decide. Here’s a Super 8mm clip:

My film animation, even on cruddy Super 8mm stock and with 3x4 inch drawings is so much better.

Autodesk Animator was a breakthrough product on the PC that was only somewhat successful, even when the price dropped to a third of its introductory price ($300 to $99). Unfortunately, it was confined to 320 by 200 resolution, 256 colors, and no sound. The graphics on the PC were strangled by a narrow bus, so even a fast PC (486’s were starting to appear) was not sufficient for a decent video experience.

On the other hand, it had a fascinating interface that was designed for artists and was fast and easy to use. It somehow did all of its work without crashing on virtually no memory in an operating system that hated graphics. It also shipped with a remarkable number of utilities that converted animations from other platforms, including the vastly superior Amiga (more on that in a later post).

I kept trying to create something worthwhile on the platform, but never succeeded. Here was another attempt that was never finished… for reasons that are obvious. I’m embarrassed to put this up, but here it is.

Around 1991, Autodesk came out with a second product: Animater Pro, which listed for about $800 and could do higher resolution animations. It seriously stumbled for about a year while the immature PC platform tried to speed up its video bus. By 1993, the program was stabilized and worked very well. I was able to produce a couple of animations on the platform that did not look too bad.

The program still had some problems. It did not do sound at all and there was still no decent way to export your product to video and television without a lot of expensive hardware.

In 1995, Autodesk released its final 2-D animation software: Animator Studio. It advertised the software heavily. It featured sound and an unlimited color spectrum. Unfortunately, it managed to hit the scene at an awkward time. PC’s were about to receive a revolutionary update, Windows 95, which required an urgent update for Autodesk. Clean, television friendly video output was still very difficult. Worse, the program was clumsy and simply did not run very well. It was difficult to create animations in the program. I played with the program for a long time and created nothing useful.

In 1996, output to video became possible as affordable (but still expensive) m-jpeg systems began to appear. Finally, you could output a broadcast quality signal. Unfortunately, the tools for animation were no longer receiving support from Autodesk. I did manage to create a few animations for broadcast, using Animator Pro in MS-DOS and then porting them over to Windows and adding sound. One of them got a lot of television play locally for more than a year. See if you can spot the drawing pixels…

So, let us take an “animation pause” and remember Autodesk. 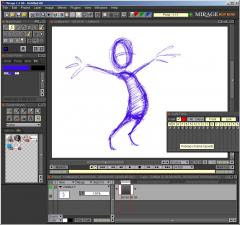